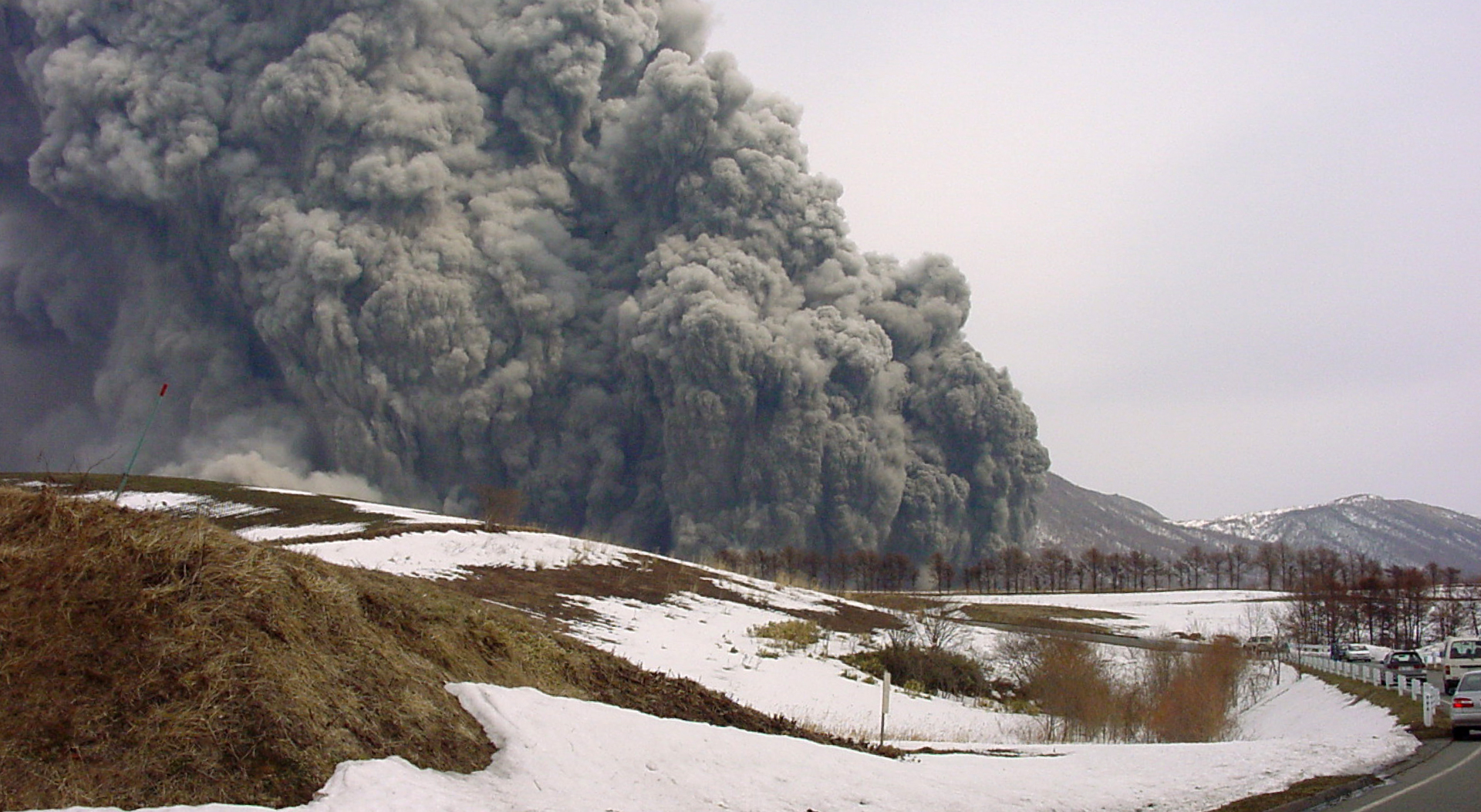 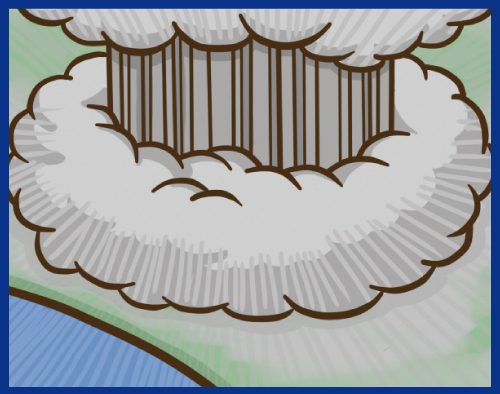 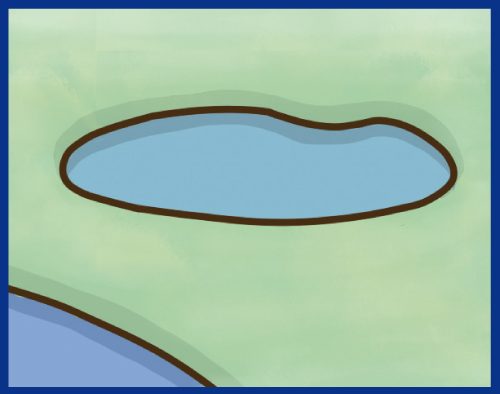 Lake Toya was formed.
It took a long period of time for the depression to be filled with precipitation. 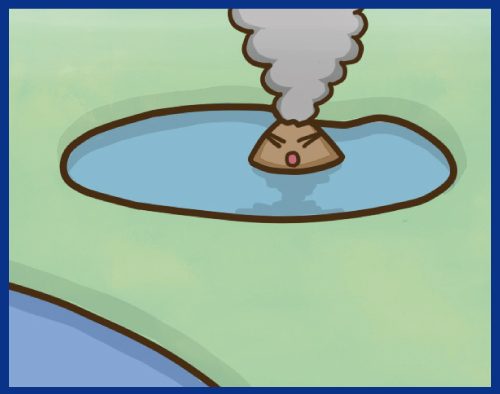 About 50000 years ago
Formation of Nakajima island(domes) 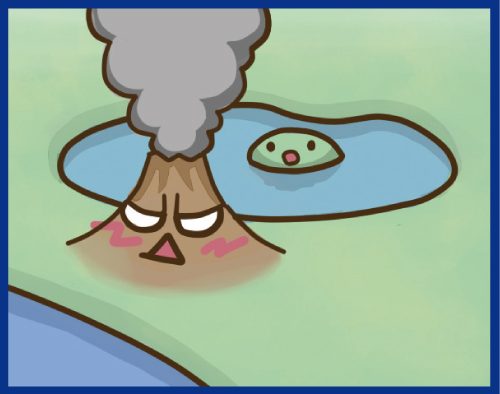 About 20000 years ago
Birth of Mt. Usu stratovolcano 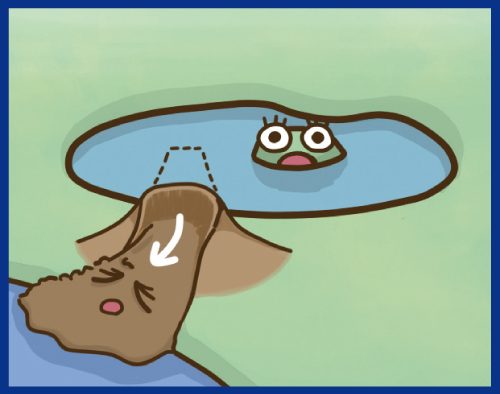 About 10000 years ago
Collapse forming debris avalanche deposit
Mt.Usu lost its summit and entered into a period of dormancy. 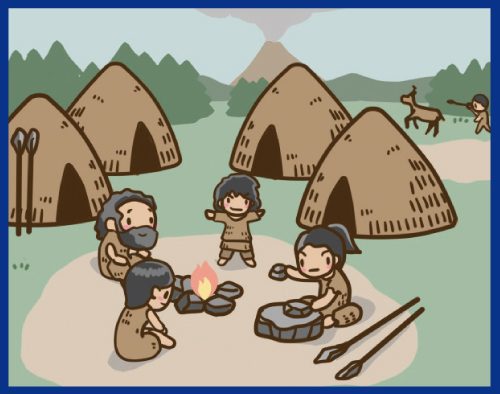 About 10000 years ago
People around Lake Toya
Used stone tools 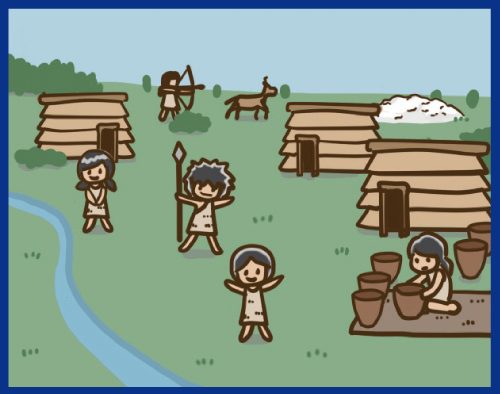 The Jomon culture thrived
Villages and shell mounds were formed. 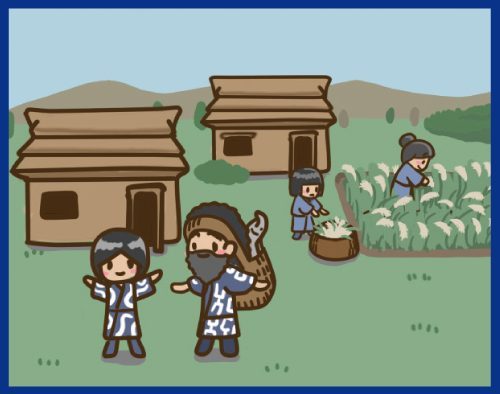 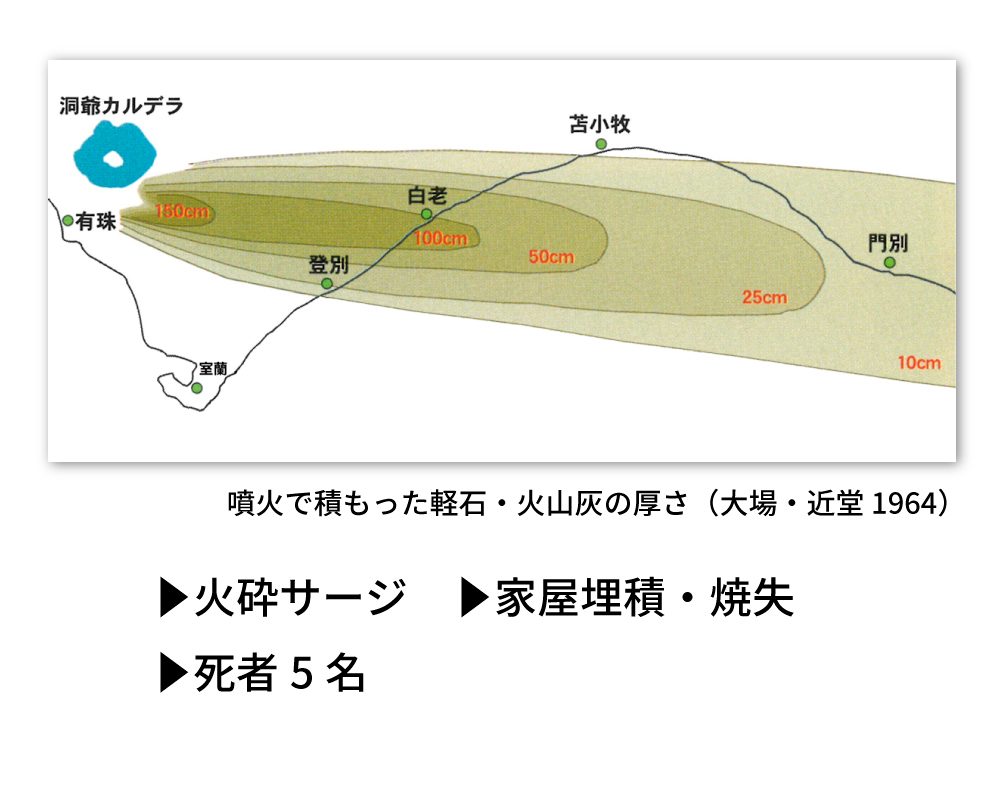 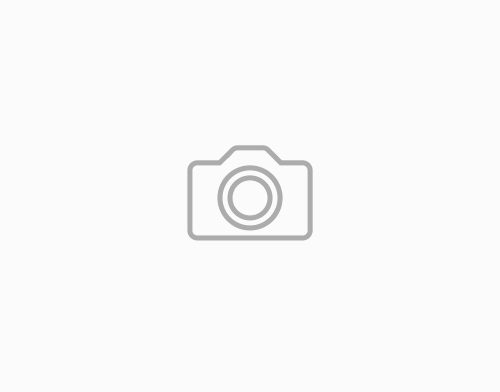 Around the end of 17th century
No written records,but volcanic deposits found. 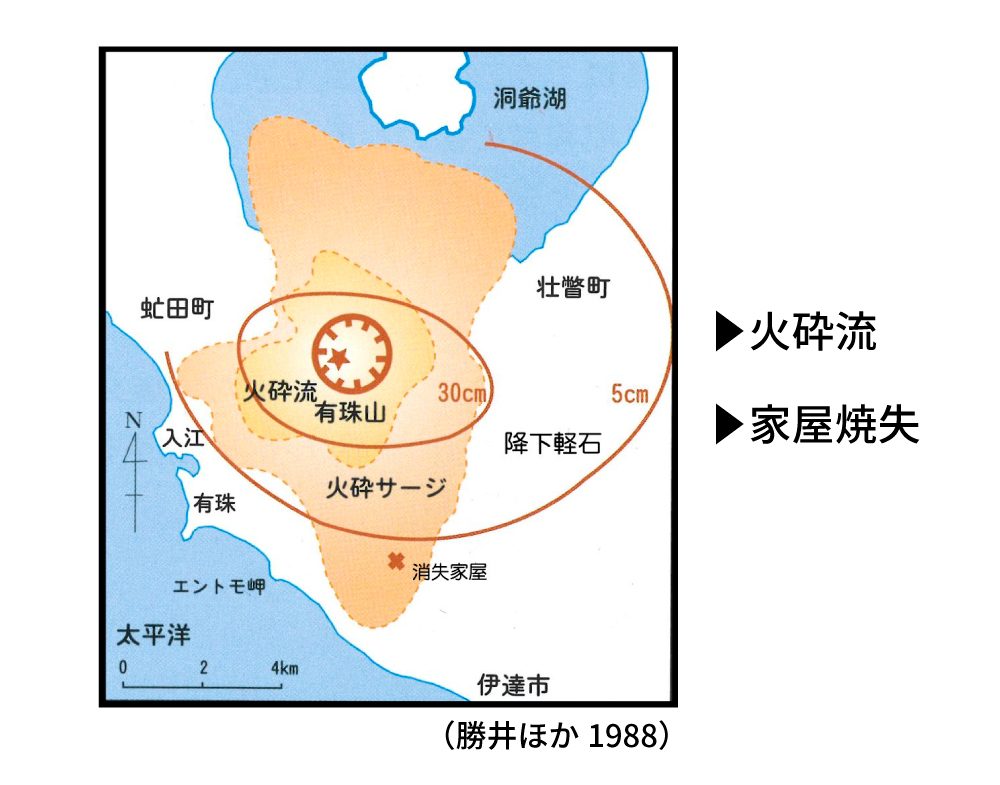 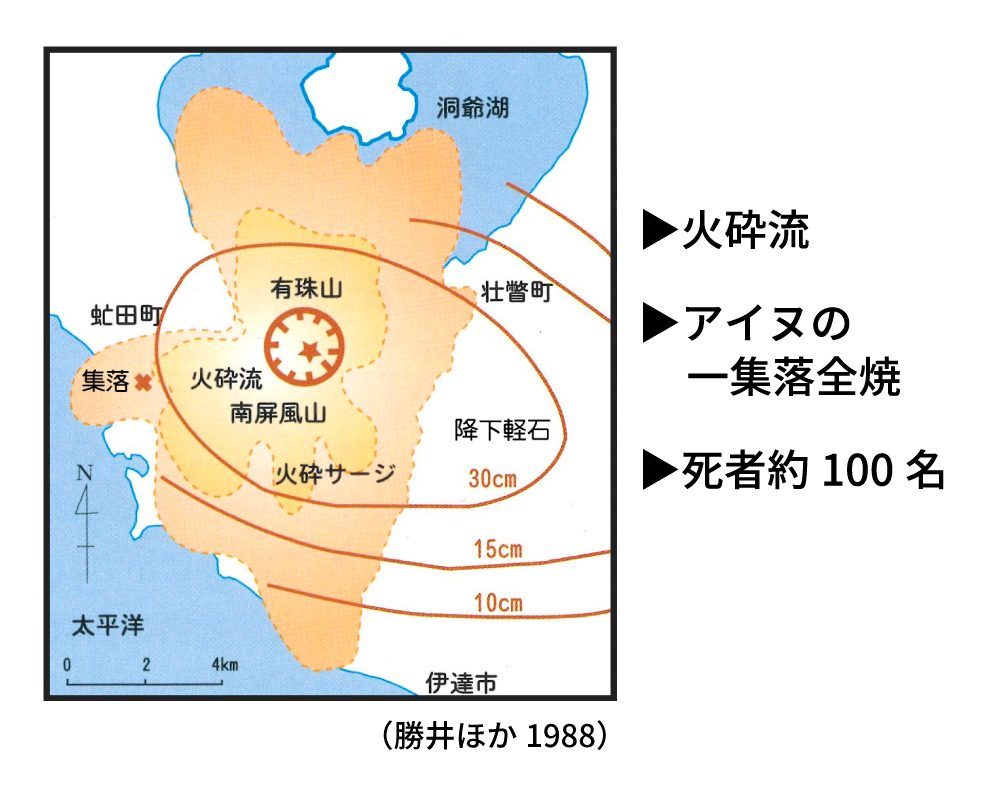 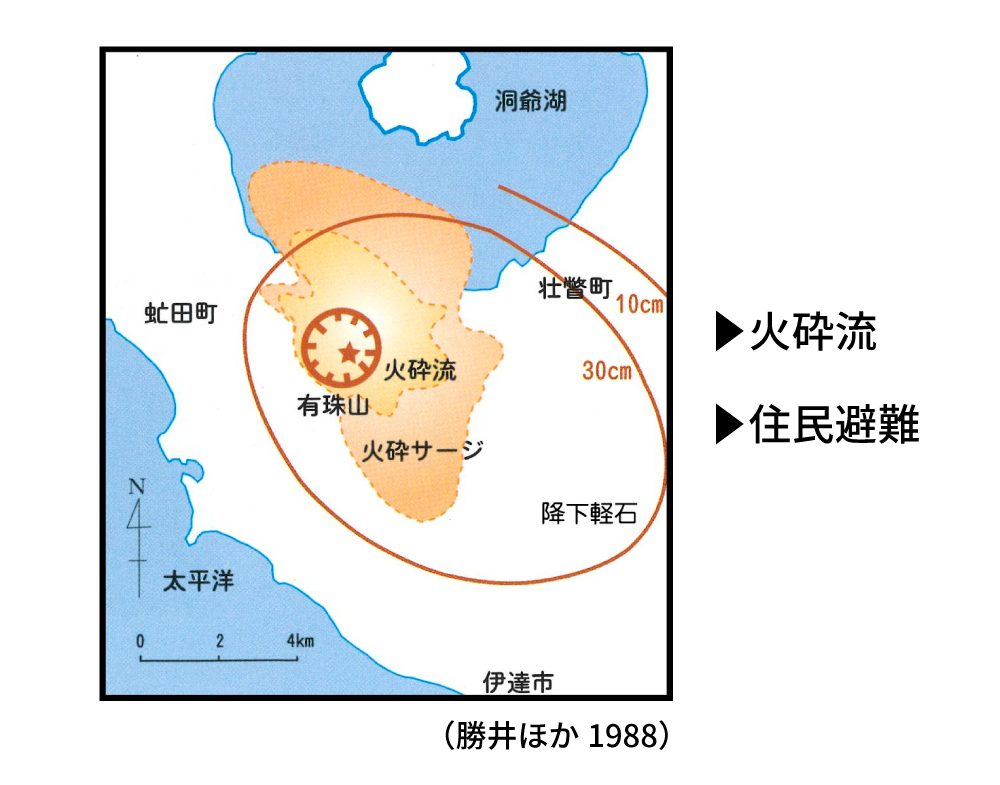 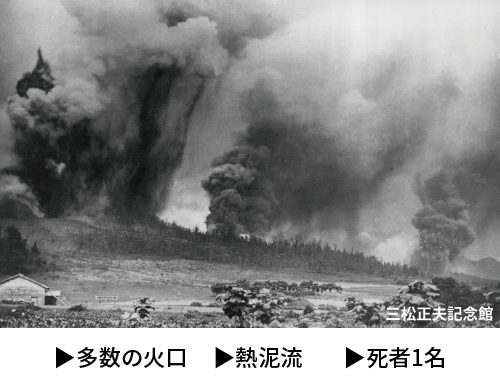 1910 Eruption at the northwestern flank
The birth of Meiji-Shinzan cryptodome.
1 casualty from hot lahar. 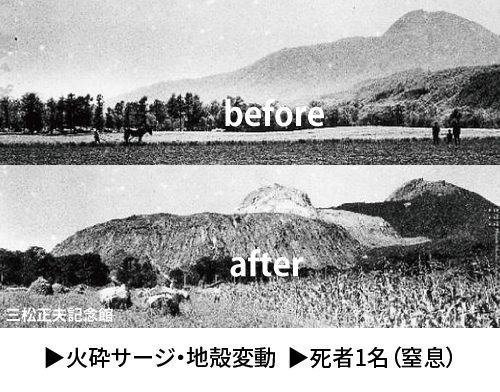 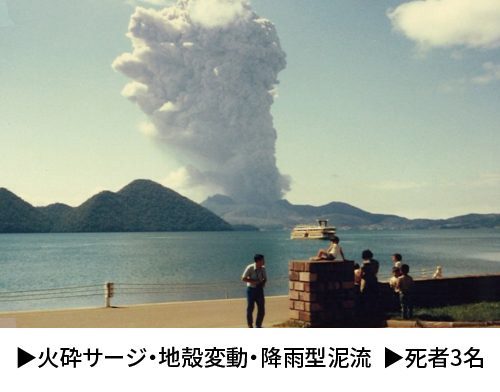 1977-78 Eruption at summit
Birth of Usu-Shinzan cryptodome.
3 casualties from lahar. 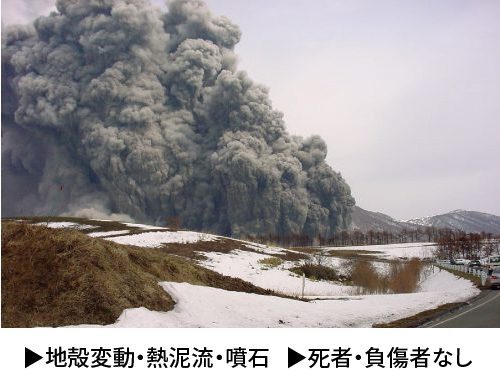 2000 Eruption at the western flank
The birth of 2000 Shinzan.
No injuries or casualties due to successful evacuation. 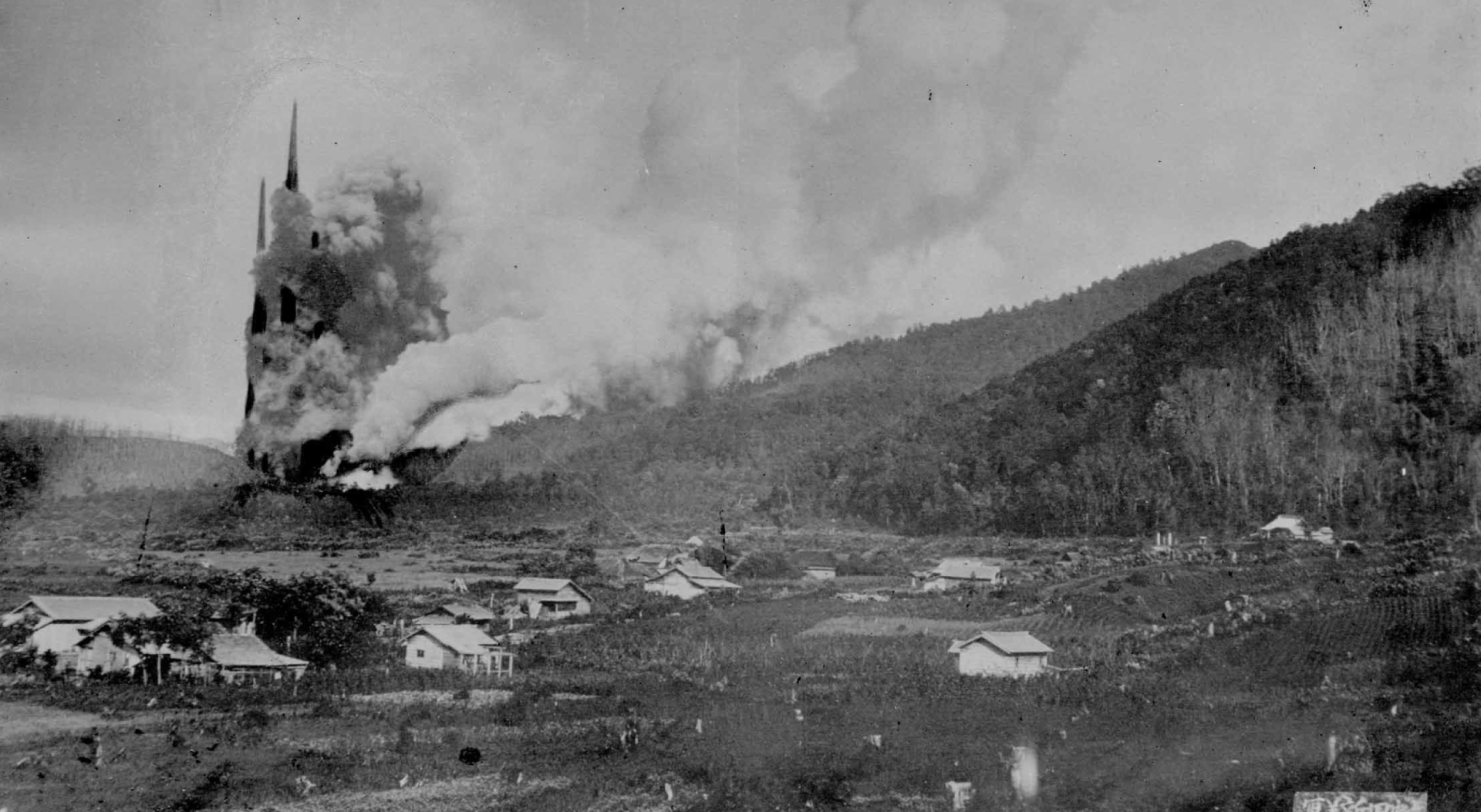 Mt.Usu, in south west Hokkaido has been active since the Edo period in 1663. Recently, Mt.Usu has been erupting every 20～50 years, so to coexist with the volcano has become an important theme to the surrounding area.

It is highly important for residents to correctly understand the characteristics of the volcano and pass on both the wisdom to mitigate a disaster and the memories of the eruptions in preparation for the next eruption.

People who have learned the nature and characteristics of Lake Toya and the Usu Volcano area and pass on both the memories and experiences of eruptions and the wisdom to mitigate a disaster to the next generation in and outside the community are certified as Volcano Meisters.

The Toya-Usu Volcano Meister System is a sustainable scheme to develop such learners and communicators.

Coexistence with the changing Earth.

People from many occupations with a passion for action.

How to become a Volcano Meister

The examination is held once a year.

It is the duty of qualified Volcano Meisters to be active in the community.

So the contents of the oral exam are held in the field and thru an in-depth interview about your personal vision for the future.

The Volcano Meister certification examination is held as an event related to International Day for Disaster Reduction.

In 2011, the autonomous “Volcano Meister Network” was established. Alongside holding study workshops to pass on their experience of evacuations from previous eruption disasters and knowledge about disaster risk reduction and work as geotour instructors, the network is actively involved in activities to share the value of the Toya-Usu UNESCO Global Geopark widely both inside and outside of the region.

The preservation of eruption disaster remains of buildings and roads is an important feature of this region. However, the remains themselves do not convey a detailed picture of the experiences and damage at the time the disaster took place. We need people to convey the stories of that time. This is the role of the “Toya-Usu Volcano Meister”: local residents with extensive knowledge of volcanoes who can teach about geo-hazards and disaster risk reduction. Their disaster risk reduction education activities are an important feature of this region and a valued element of the UNESCO Global Geopark.

Volcano Meister is a human resources development system developed in 2008, which is operated by the Hokkaido Government Iburi General Subprefectural Bureau and Toya-Usu UNESCO Global Geopark Council which also form the head office. In preparation for the eruptions which are thought to continue in the future, this initiative aims to increase the number of individuals in the region who can educate about disaster risk reduction. At present, there are 57 active certified Volcano Meisters.

Because this qualification is limited to residents of the one city and three towns in the geopark area, in normal situations it is required that they not only conduct disaster risk reduction education activities, but also work to convey the value of the UNESCO Global geopark. When an eruption draws near, they urge the speedy evacuation of the area. With regards to tourism, they utilize their knowledge about Usu Volcano and experience of previous eruption disasters to give guided tours that leave visitors with a strong sense of satisfaction, featuring explanations of a wide range of topics including the value of the region and the blessings brought about by the volcano.